New MITA coolers – PME-E open-circuit towers – are also part of the air conditioning system for the Italian Radio and Television company’s historic building, at Via Teulada 66, in Rome. 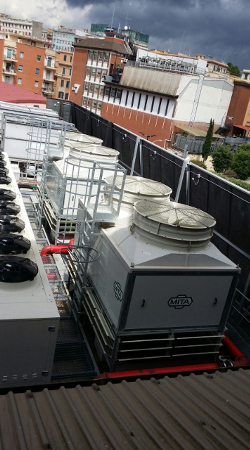 The TV Production Centre (TVPC) in Via Teulada, has just celebrated its 60th anniversary: Italian viewers can remember its light brick building, the old “RAI” logo, and long-running programmes such as Porta a Porta, Chi l’ha visto, La Vita in Diretta (shot in its nine television studios).

Some areas of the building’s air conditioning system had to be renovated, particularly the stainless-steel old cooling towers, which have been running for 30 years. So, they needed to be replaced with equipment that was:

Retaining the support structure in the inner courtyard was also a critical factor.

Thanks to the lightness of some non-metallic materials, the design studio, in partnership with Amedeo Scardini SaS, decided on the installation of fibreglass towers by MITA Cooling Technologies.

Two PME-E 4103 CW Silent open-circuit cooling towers were therefore installed in the courtyard of RAI at Via Teulada 66. The low level of noise comes courtesy of low rpm motors coupled to fans with special profile blades.

A point of particular satisfaction: RAI is an internationally famous symbol of Italy, for which MITA Cooling Technologies has supplied a ‘made to measure’ solution.

Subscribe to MITA newsletter and stay updated on technical solutions for industrial and civil cooling and get to know our offer.